I used to wonder, is it really possible to be that tired? I mean, I don’t think I even knew what it meant like to be tired back then. Silly things were “tiring”.

Ran too much in the gym, “Wow! That was tiring!”

Cycled too far,” I’m tired now but that was freaking awesome!”

Sleepover with friends, ” We chit chatted all night at her house, made peanut butter toast … I feel so tired now. Need a nap.”

You know? I’m sure I could think of such instances when I was just pure tired. I know I was tired back then too. Just different tired.

Lately, the word tired feels like it has a different meaning altogether. It has transformed from one level of physical exhaustion  to an entirely new dimension of  feeling as if you are bogged down by 200 Kilograms of iron tied down to your body. And usually, you manage to drag it along because you get better at if. Of course you do! Because you learn to adapt, make changes, you realize new things about yourself which in turn helps you feel lighter(or stronger!) and perhaps a little less mentally tired at the least.

But there ARE times you really can’t do anything about it.Even if you’ve learnt to cope it, there are times you feel it eating you up….

Like yesterday! I needed to wash my hair, and I know it takes me way longer than it used to. I

have to take my time to shampoo and condition my hair and give my arms enough rest through the process and so it takes longer than it used to, even with hair almost half the amount I previously had! It can hurt like crap sometimes – holding your arms up while you shampoo and condition your hair (thick, curly hair…) and then once again to rinse it all out…your fingers can hurt, you wrists beg you to stop… you know, in short… it’s not like before. But anyway. By the time I had nice and clean hair, I was so TIRED (yes, now this is what I mean by tired) that I could’ve just fallen asleep in the bathroom – literally ‘fallen’ asleep right there and I’m not sure what would have happened next.

I managed to walk myself out of the bathroom, threw on a dress and just flopped right onto my bed and slept off within seconds. Magic. It doesn’t happen all the time. I wash my hair a few times in a week, and even if  I’m ridiculously tired sometimes, this doesn’t always happen. Has it happened before? Yes. Several times. There have been times when I planned to either get work done, or freshen up and go out after shower, or after a longer version of shower because of hair wash, and I ended up just so tired that I slept instead.

Going back to yesterday, I was so low on energy that my body just said ‘goodnighttakecareicannottakethisanymroeandiamgoingtosleepnowbye‘ and there I was, back in bed just about an hour and half after walking up. I think I managed to sleep for almost two hours and when I woke up, I felt like a total zombie. I didn’t know what time zone I was in and I had no clue how I landed up on my bed.

I was completely wiped out!

It’s kind of funny though, now that I think of it. These things are funny. OK first off, I think I’d hurt my body a lot if I actually were to just fall asleep in the bath. Second. Ouch! I don’t even want to imagine how I’d get up! Third. Who’d have thought I could ever be so tired that there was a possibility of me sleeping in my tub? :)

Well… now that I know it’s all just part of it, I don’t question my body too much. When something like this happens to me, like I just collapse on my bed, I take it as a sign – it’s a way for my body to communicate to me that it needs even more rest. I do give my body quite a bit of rest, but I can’t always ensure that it gets the right quality of rest it needs. I believe I need to make more changes in my life in order to feel that sort of rest someday. More things  need to shift and fall in place. It’ll happen. But for the moment, yes, I think I provide my body with as much rest as it needs and yet there are times it  just demands more out of me…

I keep telling myself, “Keep Calm And Trust Your Body”

It’s become a mantra these days. 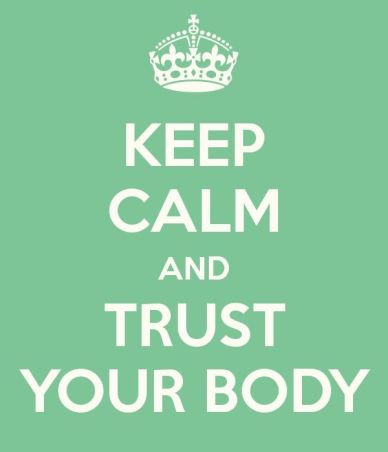 Frankly speaking, when I feel as if I need help with things like washing my own hair, I just ask. There have been times when my shoulder joints have been off position, so  obviously there have been times I needed help. There is a part of me that still wants to be able to do everything myself and I think that is just so natural to feel this way. Come on, it’s your hair and you want to be able to wash it yourself! However, the more I realize that there is nothing wrong with asking for help… the more the voice inside of me that says it’s wrong to not be able to do something yourself calms itself down. It’s not wrong at all. We have a body, it has its own limitations. We have a strong mind along with that, so I’m sure we know exactly when we can or can’t do something. There is no reason to hide and there is no reason to act like it doesn’t hurt… if it actually does! I’ve learnt this along the way. The more true you are towards your pain, to yourself and to others, whether others believe it or not, the better it is in the long run. So it’s not wrong to come home to yourself and realize that hey, I can’t do something. What is wrong for sure  is to push your body beyond its limit and hurt yourself to an extent that you can’t do anything for yourself or others anymore.

Talking about the possibility of me sleeping in my tub…. if you can’t quite reach me, if I’m not answering your calls or texts for too long and it’s not really my afternoon nap time….

……you know where I could be. Just saying.