The thing about having loose joints is that one can’t quite tell when, where or how exactly they would move out of place. That’s just how it is.

And that’s usually when something goes wrong.

That particular morning all I was doing was preparing breakfast for myself. It’s not as if I was doing something physically strenuous – I  was only making oats! Since the refrigerator was on my right, I reached towards it with my right arm and pulled it open, while still facing the stove. This very position, the outward rotation position, can easily dislocate the shoulder joint. And I know this. Yet, while making oats, I probably just forgot.  And that’s it – that’s when it happened. It was too late by the time I noticed my position – I felt a pull, a sharp pain deep inside my right shoulder joint, as if a little more space was created inside of it. More than what already exists anyway. I knew it had happened again. My right shoulder had moved out of position and I didn’t need a doctor to tell me this.

What’s worse is that I knew I couldn’t do anything about it. I didn’t need a doctor to tell me this either. My arm felt heavy and I was slowly starting to lose control over it. While using my left arm to support my almost-dead right arm, I somehow grabbed two icepacks from the freezer and jumped into bed.

Thank goodness I had Physiotherapy that very day. By the time I reached the clinic, I could barely move my right arm and the muscles around my shoulder joint were turning super stiff. The pain was building, and I could feel it running down my ring finger. My right palm was beginning to turn cold. It was all happening again. All over again. It felt as if I was experiencing a tiny 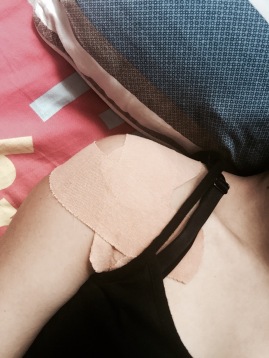 I’ll be honest. There is always a slight frustration that builds up  when something like this happens …because you know it’s time to slow down yet again. Even more than usual.  You know that you’re back to square one in some way or the other. It felt like a year back once again.  My
right arm was back in sling once again.

It affected everything — I couldn’t continue working on my pretty patterns, I couldn’t cook for myself,I needed my friends to get me groceries, I needed help with washing my hair and getting dressed and I started to feel more handicapped than “normal” . The pain level  just got unbearable. This meant more than “normal” exhaustion, which meant I needed more sleep, which also meant that falling asleep became more difficult.

I had my sling on for almost eight weeks before I could even dare to step out of the house without it. During these eight weeks, my right shoulder needed extra attention from my Physiotherapist. This affected the pain in my other joints and made things a whole lot worse in general. I was quite familiar with this cycle.

Because of this incident, my poor left arm had to do more work than usual. It had to help me look after my injured right arm and the other six joints. My left arm is already quite weak due to my unstable left shoulder joint and elbow, so it started to feel the extra stress right away. Through the eight weeks, I was worried whether my left shoulder would be able to handle this! 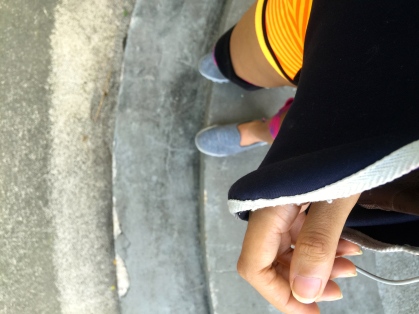 Now, it’s been almost nine weeks and my right shoulder still hasn’t completely healed. Thanks to the faulty collagen, my body takes it’s own sweet time to heal. I am familiar with the tendency of my body to recover slowly so I’ve been calmer this time. I try to be more patient with it and let it take its time. I’ve learnt that there’s no use pushing it because it’s not going to change a thing. The only thing that happens when you rush this  is that you feel dissatisfied with your healing process. And that’s not very helpful.

People usually find it difficult to relate with the fact that I pulled my shoulder out of its socket (not completely, thankfully) by opening the door of a refrigerator. No, I don’t need to lift anything heavy, fall down, get into an accident, play rugby, swim butterfly stroke, play tug-of-war, get into a fight or anything along similar lines for it to shift out. Sometimes I just need to open a refrigerator. That’s all. It’s not normal, I know. But in some ways, this is very normal for my body.

I feel it’s going to take a while more before I no longer need to carry the sling around and feel the pain finally decrease. But until then, I’ll have to wait it out. That’s the only way to go.